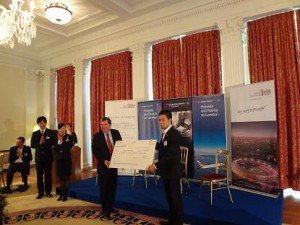 British Airways held a campaign to promote travel to Japan during the month of May. They donated ¥5,000per ticket sold to support disaster relief efforts. Masahiro Otake attended the donation ceremony at the British Embassy.
We are grateful to British Airways for their generous support on behalf of those in the Tohoku area.

This donation will allow us to deliver more food and supplies to the region. Thank you very much!!