This year was the year of establishment of this award. There were over 380 entrees of companies and other organizations, and Second Harvest Japan was chosen as one of the 35 finalists.

Our name has also appeared on the paper as one of the finalists! 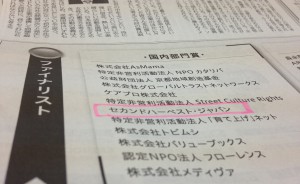 Second Harvest Japan indeed receives many words of thanks in return to our daily operations.

For example, we are thanked by food companies and farmers for utilizing edible food that would have been disposed if it were not for food banks.

We are thanked by those in need of food when we support them through food banking.

One of Second Harvest Japan’s slogan is “from ‘mottainai’ to ‘thank you’.” We will continue to embrace and work for our mission.