A Popular Manga, “Kochikame” Features Food Loss and the 1/3 Rule

Information about the 1/3 rule, which requires that food be disposed before it has expired, was featured in the comic Kochira Katsushika-ku Kameari Kōen Mae Hashutsujo (more commonly known as “Kochikame”) in the January 28th, 2013 issue of Weekly Jump. 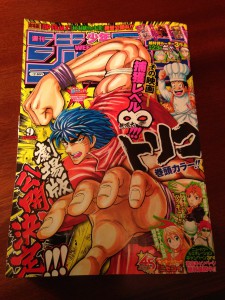 Kochikame is a popular comic first published in 1976, and actively observes society’s popular culture and trends.

The main character, Mr. Ryoutsu received food that would have been wasted from a food manufacturer, drove it down to “Shitamachi” (“the older parts of the city”)  and distributed them to people there who were very appreciative. He then receives attention from the mass media for his work and the story develops from there.

Definitely give it a read!