“This is the best form of rehab I could ever do!” Volunteer interview No.8: John Wood

Our volunteer interview No. 8 features John Wood. The interviewer this time is Kuniyoshi Oguri from the previous interview. 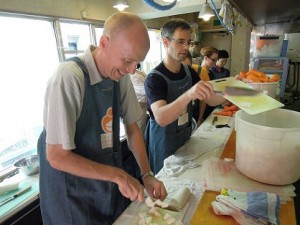 How old were you when you started volunteering? What volunteer activity did you do?

Five years old. I assisted my mother with preparing food parcels which were sent to missionaries working overseas in India, Thailand and such places. I remember going to the warehouse to help choose the goods, packing the parcels at home and going to the Post Office. Forty years later here I am at 2HJ sometimes helping prepare food parcels for the Tohoku earthquake victims and others in need.

What is the general attitude or feeling about volunteering in New Zealand? It is definitely encouraged and viewed as a positive activity. There are many volunteer organisations to choose from, but sadly too many people in need of help and not enough volunteers. I was lucky to be brought up in a home with a strong sense of social justice and I was always aware that there were many people worse off than me. In particular, my mother and grandmother were actively involved with volunteer community work, so some of this must have rubbed off on me.

What does volunteering mean to you in your life?

Giving something back to a country (Japan) that I love and which has blessed me with so much. Volunteering at 2HJ has brought more of a balance to my life and I feel like I’m a better person for it. After a 20 year career in banking, which was all about taking, it makes a nice change to be giving. 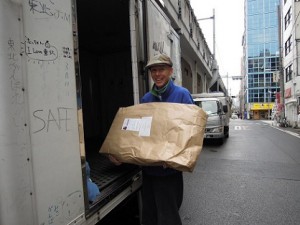 How did you find out about 2HJ, what made you volunteer and what have you been doing at 2HJ ?

Two years ago while playing with my children in Ueno Park, by chance, I saw 2HJ’s soup kitchen in action. I was genuinely shocked at how many homeless people were queuing for food. I made a promise to my children and myself that I would somehow help 2HJ. After many months of procrastinating, I contacted 2HJ and became a volunteer. I have been lucky to be able to re-schedule other commitments in order to be free to volunteer for a full day most Fridays, a decision which I have no regrets about. Mostly I am involved with the soup kitchen preparation but I’ve also been a driver’s assistant and sometimes help with food parcels and loading/unloading trucks. If something heavy needs lifting, invariably it will find its way to me!  At the end of each Friday’s volunteer session, I like nothing more than to sooth any sore muscles with a bath at a nearby sento – a wonderful feeling of contentment and being at peace with oneself after an honest day’s work.

Could you share your lasting impressions you have and things you have learned about your experiences at 2HJ?

I will always remember the first job I did at the soup kitchen; breaking up slabs of mochi into square cakes. Why? Because I have a hereditary condition which has resulted in two crooked fingers. I had been having hospital rehab’ for many months without any noticeable effect, which left me feeling frustrated. As soon as I started breaking up the mochi, I could feel some power return to my fingers and I thought to myself “this is the best form of rehab’ I could ever do”.   I can never forget working underneath the train tracks at 2HJ on 11th March 2011 when the big earthquake struck. Sure there was a sense of panic amongst us volunteers, but it also felt like we were all in this together and as a result I think the regular volunteers are now even closer than before. 2HJ’s fast response to this disaster and the hive of activity in the months that followed was incredible. The outpouring of generosity by way of donations and people volunteering was beyond what I imagined possible.     It has also been a great experience to meet many volunteers from all over the world, even if only for one session. Every Friday I have no idea what I am going to be asked to do and who I might meet – working at 2HJ is always a highlight of my week.

Do you have any suggestions to make 2HJ activities better?

Not that I can think of. 2HJ are doing a great job and I’m enjoying being part of this worthy cause. 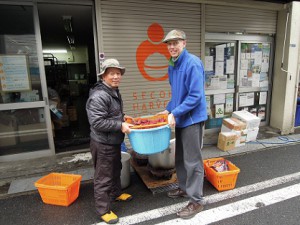 Do you have any message to Japanese young people about volunteering?

Don’t procrastinate, just do it, if only once. The happiness that it will bring you will outweigh any sacrifice you might have to make. The younger you start, the better. My youngest son is looking forward to being old enough to be a volunteer at 2HJ.  I once brought my 12 year old son to 2HJ to help with food parcel preparation, an idea he wasn’t so keen on at first, but at the end of the session he said “Dad, that was fun. I want to go to 2HJ again.”