On the day of the disaster, Second Harvest Japan provided 4,000 servings of hot meals, soup and bread, for stranded commuters in Tokyo. 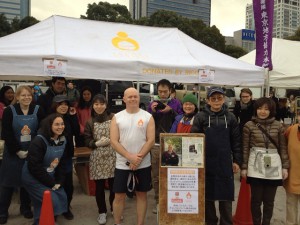 One year after the disaster. This picture was taken at the earthquake reconstruction support event; our executive director Charles walked (ran) across the three disaster affected prefectures, and finally arrived at the event arena.

Hot meals were served in the same fashion as the day of the disaster. Two thousand servings of soup and bread were provided to the event participants, with the help of great volunteers. We observed March 11, 2014, this week.

It has been three years since the Great East Japan Earthquake, and Second Harvest Japan has continued its support for the affected areas.

Awareness for food and beverage stocks for emergency situations has heightened since the Earthquake. We are seeing increases in “banking” of emergency food stocks with an expiration date of a few months (or one year), not only from individuals but also from companies.

The “Rolling-Stock” method of emergency food supplies is being discussed as a new approach following the Earthquake. Have you experienced finding expired food that was stored 3-5 years ago as your emergency food stock? In order to avoid this situation, consume “emergency stock” foods on a regular basis and replenish as necessary.

Consuming and purchasing new food for your home storage is thus, the “rolling-stock” method.

Earthquakes are not something to be overlooked. It could happen to any one of us, at any time.
Please refer to the site below for details on “rolling-stock” emergency food storage.