It has been two years and two months since the disasters which destroyed vast sections of Japan and took the lives of countless people. Our recollections have blurred and our thoughts have moved on to other things, but how much has really changed in these two years?

Here are some statistics about the situation now in Ishinomaki, and about Second Harvest Japan’s involvement in the relief efforts.

- There are 17,568 people still evacuated to one of 6,568 private apartment style housing units.

- These numbers DO NOT include the many who were refused access to subsidized housing.

- Those who have houses are often refused government subsidies, even if their houses were rendered uninhabitable by the disaster.

- Those who have cars are often refused government subsidies, even though their cars may be unusable, they may have no money for gas, and there may not be any suitable workplaces within miles.

- Many agencies, NPOs and government programs are withdrawing from the Tohoku area, just as survivors are running out of their own private savings.

- Many of those who are able to leave the disaster areas to seek new employment and new lives in other areas have done so, leaving those who cannot move due to age, disability or other.

Just as grave and frightening as the physical destruction itself is the cycle that the Tohoku disasters created. It will be many years until those cycles are broken, and survivors can get back on their feet.

Second Harvest Japan has worked, and will continue to work with Foodbank Tohoku AGAIN（http://www.foodbank.or.jp/） and Fair Trade Tohoku （http://ft-tohoku.org/）to provide food to those in need in Ishinomaki. We hope that the food that we supply will help break the cycle that keeps survivors from returning to their lives. 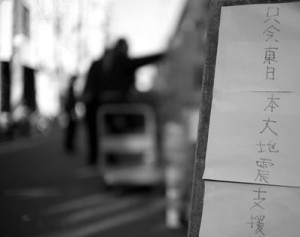