Food banking began in Japan in 2000. In neighboring Korea, it began in 1998, only 2 years earlier. Over the last 10 years, food banking has developed in different ways in these two countries. In Japan, NPOs worked to expand and promote food banking. However, we have now arrived at a transitional phase in which food banks and partner NPOs must rethink food banking processes in Japan.

Speakers will travel to Tokyo to talk about the recent hot topic: the possibility of joint cooperation between government and food banks. The speakers are representatives from government food banks, which are the most common type of food bank in Korea and now number over 400, as well as private sector food banks, which continue to actively and independently run branches throughout Korea.

Food bank groups working hard in regions across Japan will also be invited to participate in the discussion. For the future of Japanese food banks, we sincerely hope many of you will be able to join us. 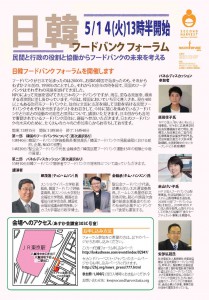 – The Role of NGOs, Businesses and the Government in the Korean Foodbank Development Process

3:10    Leaders in the Japanese and Korean food banking community discuss the future potential of food banks.

This event will be hosted in Japanese and Korean.

To register for this event, click here. (Japanese Only)